So, in the spring of 2015 I was host and tour guide to Frank Meyers of the miraculous website “Drowning In Guitars” and I took him around Japan where he toured guitar factories and met with various people who had been involved in Japan’s guitar history. One of the people I had a great pleasure to meet was Mr. Iwase who had worked for Teisco during the 1950s before forming his own company Iwase Electric, which manufactured the amazingly cool, and amazingly rare Voice guitars and amplifiers. After many many months of searching for a Voice guitar, I finally found one. 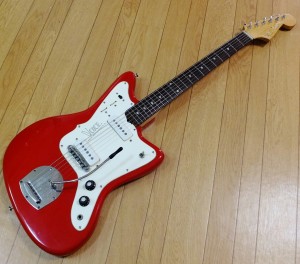 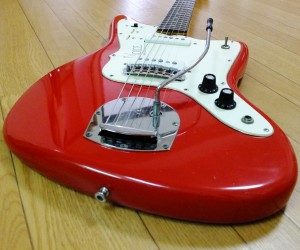 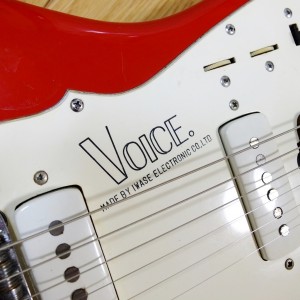 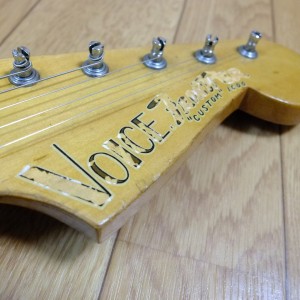 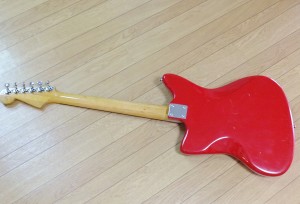 Really a thing of beauty for those who like Jazzmasters and Jaguars.

Later, I was able to arrange for a second meeting with Iwase-san, and this time I brought along the Voice Guitar which I had found and put back into playable condition to show him and ask him about it. Such a great guy, and so sharp and active, friendly and full of life.  I recorded an hour and a half of interview with him, but am just going to give some of the highlights. 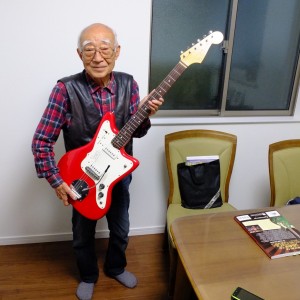 Iwase-san was born in what is now known as Shinagawa, Tokyo. He was born February 14th, in 1931.  He didn’t finish high school because his class was disbanded due to an outbreak of tuberculosis (a serious health issue in pre-war Japan).

Iwase-san had an intuitive understanding of electronics, and during the late 1940’s he found work in a radio repair shop. During the early 1950s, Doryu Matsuda, the founder of Teisco who frequented the shop asked him to join Teisco, and Iwase-san went on to produce amp and guitar designs for them, including a shifting bridge which allowed a pedal steel guitar player to switch between three different tunings with the flick of a lever. He left Teisco in 1963/64 (shortly before the Tokyo Olympics) after he felt the company was taking a wrong direction.

He formed Iwase Desnhi 岩瀬電子(Iwase Electric) in 1965 and began producing amplifiers, and on a limited basis, guitars. 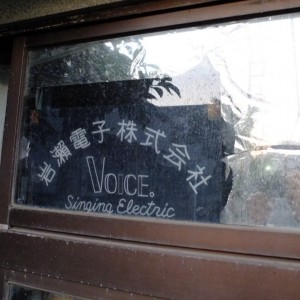 Unfortunately, he formed his own company just as the first electric guitar boom was beginning it’s decline, and he ran his company on a very limited basis out of his house. Japanese surf rock legend Terauchi Takeshi was a big fan, and purchased approximately 7 or 8 guitars from Iwase-san, including the Voice “Rich Man” 12-string he’s holding on the cover of this record: 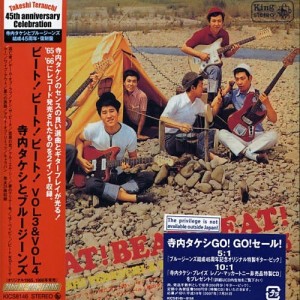 While his amps and guitars were very well received there wasn’t enough demand, and he quit the guitar business in roughly 1970 and went on to work on Ultrasounds. 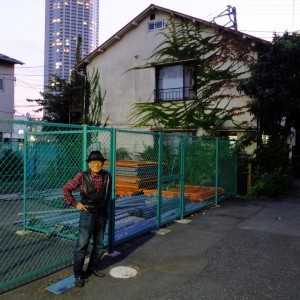 Iwase-san in front of the house where he built Voice Electric Guitars. Most of the neighbouring houses have already been torn down to make a new roadway for the Tokyo Olympics. Iwase-san’s house is scheduled to be torn down as well.

While the amplifiers were actually assembled in a separate factory (and produced in greater numbers, though still very rare), The Voice guitars were made by hand by Iwase himself at his house. He made three models – the Delicate (an earlier version of the above guitar, featuring slightly different pickups) which he discontinued soon after an American told him that “delicate” was associated with “weak”, the Frontier 1000 as shown above, the Rich Man – a 12-string version of the above, which he estimates he built roughly 10 of, and an SG-8 Pedal Steel Guitar (I have never seen one of these except in catalogs).

When I asked him again how many he made, he wasn’t sure and gave a funny answer – he said “more than 250, but less than 1000.” He didn’t number them. (Another figure bandied about when I met him the first time was roughly 250 to 300.), and depending on how early the model is, they range from 80 to 95% handmade. Even the tuners on the earliest ones were made by hand! (the Voice Guitar featured on page 64 of Frank’s book is one I obtained for him, and features the handmade tuners, which uses plastic buttons which were adapted from a local plastic factory that made toy costume jewelry necklaces.)

The pickup covers on the Voice Guitar pictured above were made by carving a mold into a wooden cutting board, and then melting melamine, keeping it pliable with boiling water, and pressing it into the mold with another smaller block, trimming away the excess, letting it set, drilling holes, and then polishing them. They look incredible. Hard to believe they are handmade. The pickups themselves sound great. He used the best grade Alnico magnets he could get from Mitsubushi – the magnets themselves are fairly strong, and wound them on a machine he built himself. They measure in the 5k region. 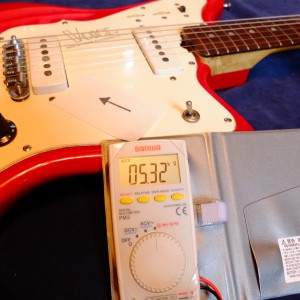 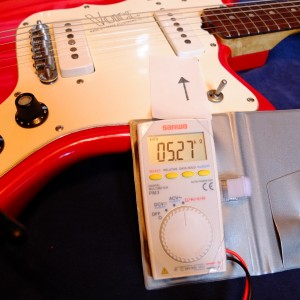 They have great character, and sound particularly good in the middle position. They are also incredibly quiet in terms of hum or noise (compared with other pickups from this era). I was very tempted to open them up and take a look at the coils, but they’re actually sealed with hot glue, which would make for a very messy opening procedure, so I figured best to leave them alone. But I can just see that they are shielded within the pickup cover in a kind of copper case.

Tone knob turns backwards towards treble (this is somewhat common on older Teisco and Guyatone guitars, as well as a few other Japanese manufacturers) the rhythm circuit tone and volume also run counter to what one gets on a Fender guitar. Also, very thin plastic roller knobs on this version. There were some versions which had flat plastic knobs that were located above the pickguard. 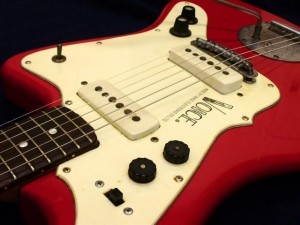 The pickguard is a hand cut and filed piece of metal (for shielding) and then the plastic is overlaid on top of it. The bridge is stamped, but the saddles are various bolt threads cut to size and then tapped for screws. The bridge is grounded via contact with the bridge thimbles which are connected to the pickguard, eliminating the need for a ground to the tailpiece. Tailpiece and tremolo were also stamped and pressed in his home.

Though he used different woods at different times, he said a large number of the guitar bodies were made out of Sakura (Japanese Cherry Blossom) as he had access to a good stock of it at that time. Necks are maple, usually 3-piece. Rosewood fretboard. He always chose the best wood stock he could get.

The neck is a 24.75″ scale neck (he actually remembered it as being smaller, and may have actually produced an even shorter scale at one time) with a zero fret. It plays incredibly well and is very comfortable. They use very unusual (probably custom made or custom ordered) fretwire which are almost like bar frets, but with a small tang. The headstock on the neck is actually pitched slightly, which is why there are no string trees like there would be on a Fender.

Overall the Voice guitars are really pretty incredible. They have a unique sound which falls in the Fender range, but comes through both cleaner and with more fullness of sound.

We also found a rare Voice amp, one of the earliest models. 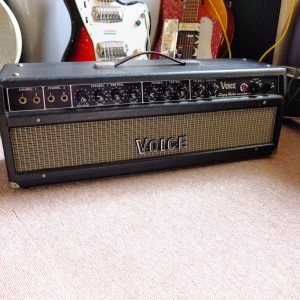 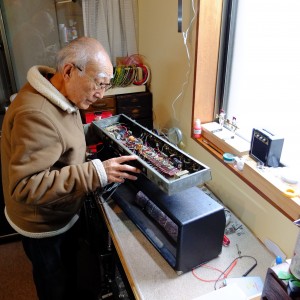 In fact, the exact model designation is unknown because Mr. Iwase frequently made one off amps depending on the requests of customers, or to fill certain unique instrument needs, included an amplifier set-up for the traditional Japanese Shamisen!

Iwase-san was so well respected by musicians and people in the industry for his electronics know-how, that when the local NCO club in Tokyo was having trouble with it’s equipment, they made an emergency call to Mr. Iwase, who came out and repaired equipment on the spot as well as bringing his own amps for the use of the musicians there (he designed all his combo amps and cabinets so that they could fit in the leg space in the back of a taxi!) He seems to have saved the day for none other than Les Paul and Joe Wolverton. 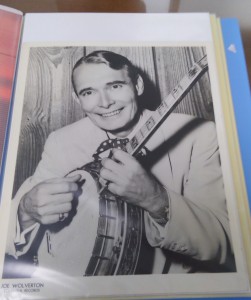 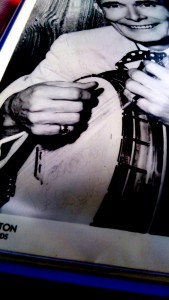 At the time of this writing, I’ve now met up with Mr. Iwase four times and recorded about two and a half hours of interviews with him. I’m glad to know him, and to have learned about his amazing history, and also to call him a friend. 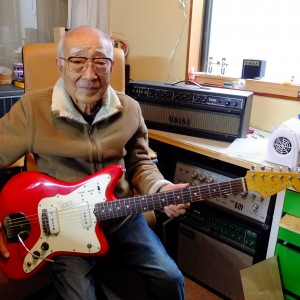