So, I’m going to lift the lid on an obscure gem. Since there are only twelve people who read this blog anyway, it’s not really going to matter. Mory Jazzmasters are the greatest Jazzmasters since the Jazzmaster.

So what is a Mory Jazzmaster? Mory is the nickname of Moridaira Toshio, who went on to found the very successful Morris guitar company. He was also responsible for the production of the H.S. Anderson line of guitars (designed by Hidesato Shiino, and made famous by Prince and his Wildcat Telecaster). However, before he did all that, Moridaira started his Moridaira company with the “Mory” brand of guitars. 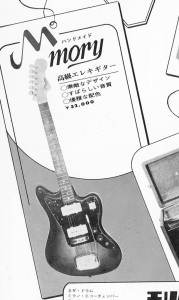 Early Moridaira advertisement. It says “Handmade – Mory High Quality Electric Guitar – Excellent Design – Wonderful Sound – Exceptional Finish – 32,000yen” – so, a little over US$1000 for 1965 Japan. Note this is a very early prototype with rocker switches instead of a toggle switch.

Initial prototypes he made by hand in a small warehouse (and this could mean large garden shed really) – behind his house – later production was contracted to the fabled Kurokumo Factory in Nagano, Japan (Kurokumo being the company behind Japanese Mosrites). I was told this by Mr. Iwase, who had also wanted to use the Kurokumo plant to do large scale production of his Voice guitars, but Mr. Moridaira got there first. I later found a picture that confirmed this connection. 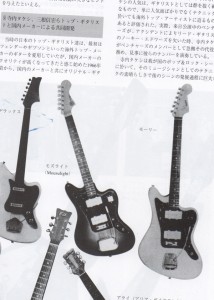 A 66 Mory on the right, and a “Mosulight” (Mosrite) branded 65 Mory on the left. Probably a factory prototype.

He ran the Mory brand from roughly October of 1965 to April of 1967, at which point the initial Electric Guitar Boom in Japan was coming to an end. After he stopped the Mory brand, he moved on to establish his Morris brand, but no longer made Jazzmasters. These guitars were handmade. (Another famous handmade guitar line in Japan were the Voice guitars, made by Mr. Iwase who originally used to work for Teisco). The Mory guitars, like the Voice guitars, are a step up in quality from most of the other guitars being made in 60s Japan. The body on some of the early Morys is actually 3 piece alder, constructed in Fender style, unheard of at that time in Japan where most competitors were using Mahogany, or Luan with veneer tops.

The Mory guitars are just about a dead on copy of Fender Jazzmasters, with a few notable exceptions, which changed from month to month depending on the supplies available. 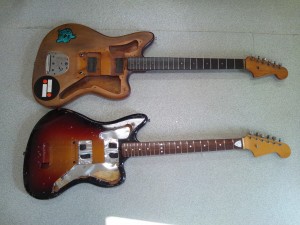 For example they started out with rocker switches for the pickup selection, then moved to slide switches, and finally to a Fender-like toggle switch. 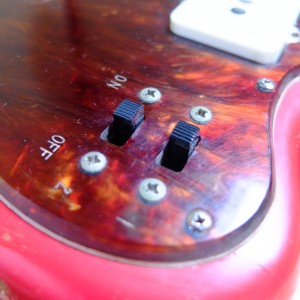 Original tuners were 6 on a strip, but later moved to separate tuners w/ plastic buttons, and finally the “Z” angled back tuners commonly available in the Japan market at the time. 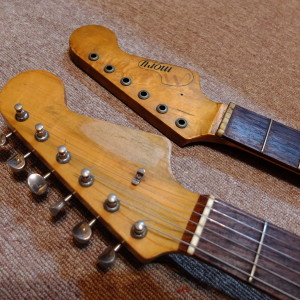 The tremolo tailpiece changed from a very unusual door hinge style to a more Fender Jazzmaster style sometime between the October 1965 launch and April 1966. 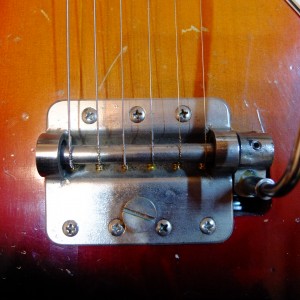 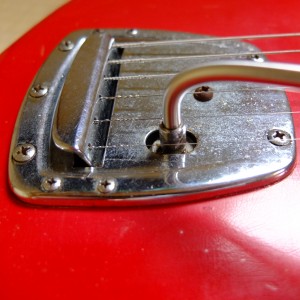 1966 Mory Jazzmaster tremolo tailpiece. Fender-esque flavour, but with raised wings and back. Slightly smaller area than a Fender as well.

The Mory door hinge tailpiece is fairly unique. Though the central bar operates in much the same manner as a Bigsby, the spring instead of pressing down onto the body of the guitar is hidden in a recess and pushes towards the tail end of the guitar via an arm assembly extended to the side of the tailpiece. 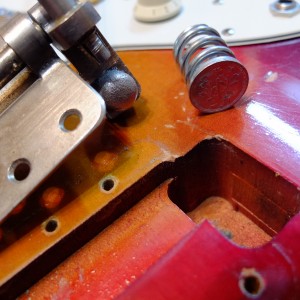 Tremolo out of the cavity with spring removed. One yen coin added to spring for extra stability.

These tremolos were accompanied by a cover which was held down by the enormous flathead screw. Due to the need to cover the extra cavity route on the side, these covers have a slightly ungainly appearance. They take up a lot of real estate on the guitar. 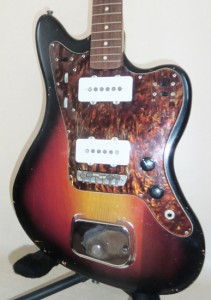 One of the great things about the Mory Jazzmasters are their pickguards. I was told by Takahiro Saito of Elk guitars that when they first started to copy Fender guitars, they didn’t know how to get the tortoiseshell pattern right, so they went to a celluloid soap box manufacturer and asked him to do it. In the case of Elk guitars, they approximated the Fender look, but in the case of Mory guitars it looks like Mr. Moridaira said “just give me what you got as long as it’s swirly” – and the results are wonderous! 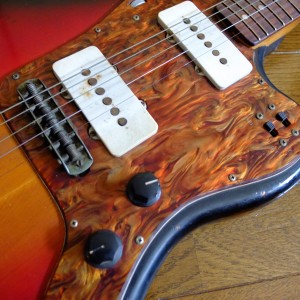 Swirled pickguard on a 1965 Mory Jazzmaster. 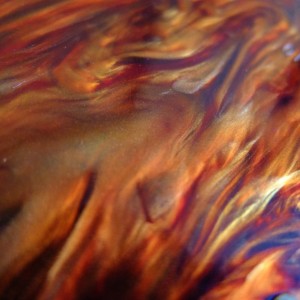 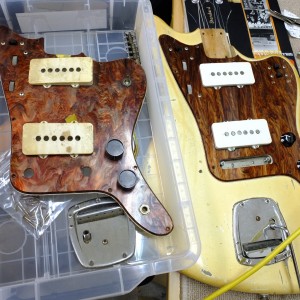 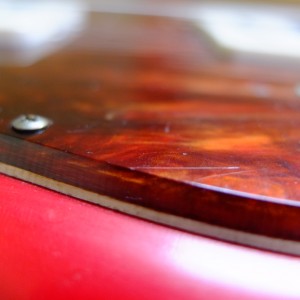 These pickguards have a thick upper celluloid layer, and then a bottom plastic layer.

The pickguards are larger than Fender Jazzmaster pickguards, most notably covering a more significant amount of space between the bridge and the tailpiece. On the bottom the pickguards were foil shielded and the pickup cavities have shielding consisting of actual strips of sheet metal.

The Mory bridge is different from the Fender Jazzmaster bridge in that it doesn’t drop into ferrules in the body and rock on integrated posts, but rather had a bridge plate with Gibson-esque posts and it was given leeway to rock on top of that: 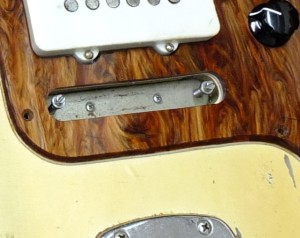 As you can see, the saddles lack the height adjustment screws of a Jazzmaster, which reduces the rattle. But interestingly this bridge is part of a curious design flaw in the Mory guitars. The ground connection for the strings runs under the bridge, which is similar to 1958 through early 1960 Fender Jazzmasters which were supposed to make connection through the bridge ferrules (Later Fender Jazzmasters were grounded to the tailpiece). 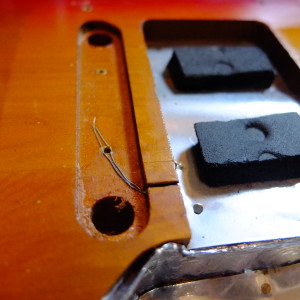 Most of the time this ground connection is fine, but on some, when one starts to use the tremolo arm, it causes the connection between the ground wire, bridge plate, and strings to shift, resulting in soft static. It’s easily corrected by moving the ground to the tailpiece which allows for a more consistent connection to the strings.

Pickups in the Mory Jazzmasters are stronger than Fender Jazzmasters in terms of resistance, usually measuring in the mid 8k to mid 9k region. They also use larger and slightly stronger magnets. This results in them having a stronger, slightly more aggressive tone than the Fender Jazzmasters. Bobbins are grey plastic instead of fiberboard. The coil is taller than a typical Jazzmaster, but not as wide.

Bobbins have an inspection mark, and are marked for neck or bridge placement, and interestingly on the underside the magnets for the neck pickups are sometimes marked red (either one, or all) and the magnets for the bridge are sometimes marked blue. The gauss readings for the bridge pickup magnets seem to be about 100 gauss stronger than the ones on the neck pickup, but there is a lot of variance here, and it’s difficult to get accurate readings without taking them out of the bobbins – an unnecessary step at this point. 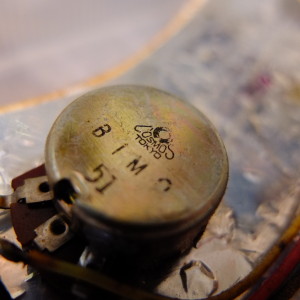 Pots for the pickups were initially 1meg volume and tone similar to Fender Jazzmasters, though later Morys have a 500k volume pot w/ a treble bleed circuit!

B curve for the volume, and A curve for the tone. Pots were supplied by Cosmos, a company still in business today, but more associated with high end audio equipment than the guitar industry (I rarely see pots made by Cosmos in 60’s guitars). .03mf ceramic disc caps for the lower tone control, and .02mf ceramic disc caps for the rhythm circuit tone.

The roller pots for the rhythm circuit do not have a set screw, but are instead bonded on to the end of the pots. They’re also bigger than Fender Jazzmaster roller knobs. So if you replace the roller knobs in a Mory with Fenders, the knob will not protrude far enough out of the pickguard to be easily accessible. Putting an old Mory knob on a modern part involves a little bit of trickery with heat shrink tubing and rubber cement, but the knobs can be saved. 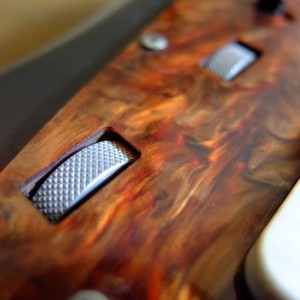 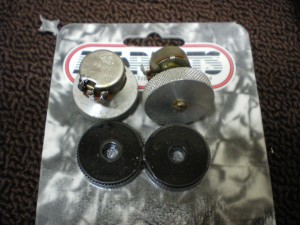 Mory Jazzmasters even came with an original case. Unfortunately the case was so poor – they practically feel like balsa wood (strange, because the guitars are so well built) that very few of them survived. I have one, and it’s not even worth photographing it’s so beat up – but the logo plate for it is still intact: 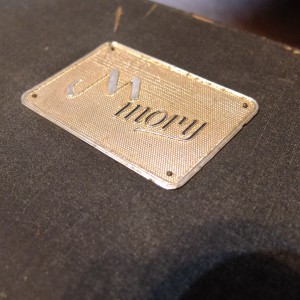 I’d say that just about covers all the differences and similarities between the Mory Jazzmasters and the Fender Jazzmasters. The Mory guitars are super obscure. They’re also super great in my opinion. As an owner of a 1959 Fender Jazzmaster, and now a 1965 and a 1966 Mory Jazzmaster, I have to say I love them all. Not exactly the same guitar, but it doesn’t feel awkward to switch from one to the other.

Despite having met many people associated with the Japanese guitar industry of the 1960s, I have yet to meet with anyone directly associated with Moridaira. Mr. Moridaira himself passed away several years ago. I’ve tried a few times to get a meeting with Mr. Minagawa, who was the right hand man for Mr. Moridaira, but have so far been unsuccessful.

I hope you’ve enjoyed this extremely guitar nerdy article. If I get any new information, I’ll be sure to update it.  In the meantime, I’ll just run it out with a  last photo which I didn’t know where else to stick in this article. Thanks for reading! 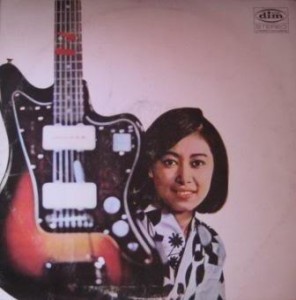 Obscure 1965 Mory Jazzmaster on the cover of an obscure Micky Anderson Record.